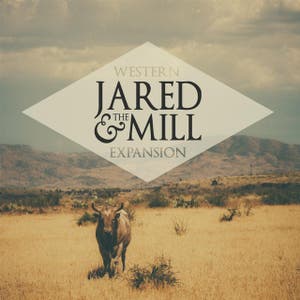 I wish I had never heard of Jared & The Mill﻿ - simply because the reason I learned about them was because of a horrific incident at the SXSW festival in Austin, TX. As you may have heard, a drunk driver plowed into a group of concert goers killing 2 and injuring another 2 dozen.  A few days later, Jared and his band went to visit some fans in the hospital. I saw a news story about it, and while the band was never mentioned by name, I was intrigued to find out more.  What I found was one of the best sounding bands I've come across in quite some time.

Jared & The Mill fall in line with bands such as Mumford & Sons and The Avett Brothers but if I'm being honest I like this band more.  Their album "Western Expansion" is outstanding and avoids the pitfall that Mumford seems to fall into where songs tend to sound the same after a while. "Breathe Me In" starts the album with gorgeous harmonies and Mumford fans will love it.  The album is full of incredible banjo picking, guitar playing, lyrics and vocals.

It is hard to use finding a new favorite band as a silver lining for such a terrible tragedy, but I was impressed with them for reaching out to fans who had been injured and equally impressed with their music.

Have a great week and enjoy the music!
Ira
Posted by Ira Miller at 6:32 PM